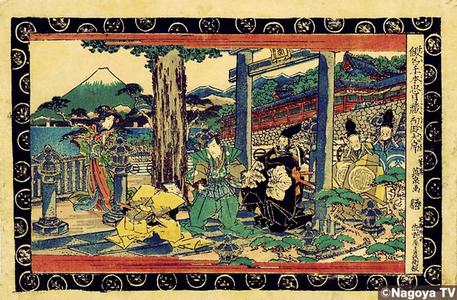 Eisen Chushingura This historic event took place on the 14th day of the 12th month of 1702. The Ako ronin, or lordless samurai, led by Oishi Kuranosuke attacked the Kira estate, and by beheading Kira Yoshinaka, the group avenged their deceased lord Asano Naganori. This event known as the Ako Revenge was dramatized in a variety of ways, but the most famous of these dramatizations is the Kabuki play, Kanadehon Chushingura, commonly known as simply Chushingura. As it was forbidden at the time to use the real names of the participants in this event, the play was recast in JapanOs medieval period, and all of the names of the principals were changed. The play is made up of eleven acts. This famous play was the subject of various series throughout the history of ukiyo-e. The scenes depicted for the individual acts became rather codified, so that the viewers of the day could immediately identify the act depicted in a print. Here we introduce a series of Chushingura prints created by the late Edo period ukiyo-e artist, Keisai Eisen. Eisen was the most decadent of the late Edo period ukiyo-e artists, and the majority of his works depict the women of the pleasure quarters. But he was known for the cool atmosphere of his aizuri prints created solely in an indigo blue. He also experimented with other effects, such as drawing in a western style frame on many of his prints. This Chushingura series is also bordered by a frame-like effect. -------------------------------------------------------------------------------- Act 1, Preface, Tsurugaoka, Kabuto Aratame (161-1-1) Representing the shogun Ashikaga Takauji, Yoshinao visited Kamakura to offer the helmet of the destroyed Nitta Yoshisada to the newly completed Tsurugaoka Hachiman shrine. Kahoyo, the wife of Enya Hogan (representing Asano Naganori) was consulted on this occasion, and Ko no Moronao (representing Kira Yoshinaka) fell in love with Kahoyo and started to court her. KahoyoOs confusion was mediated by Momoi Wakasanosuke who happened by, and in retaliation, Wakasanosuke was insulted by Moronao and was murderously enraged. The image here show the court-hatted figure of Moronao by the stone steps of Tsurugaoka with their huge ginkgo tree, where he is seen courting Kahoyo. 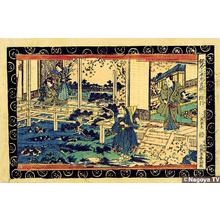 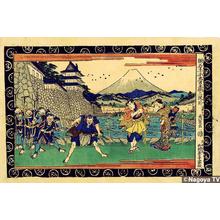 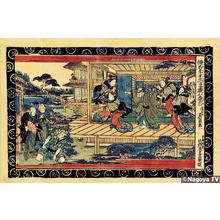 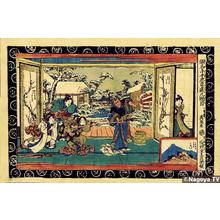 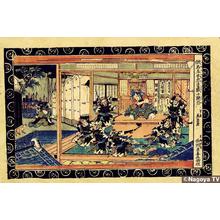 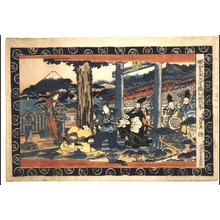