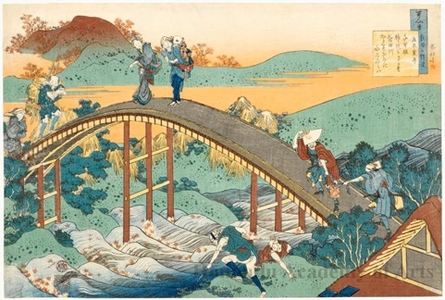 In this print by Hokusai three couples are enjoying themselves on the bridge over the Tatsuta River. The river is especially appreciated during autumn. It is evening as suggested by the orange coloring and the farmer at the left with a full load of sheaves on his back. The couple at the top with the man carrying a small boy are clearly of a higher rank than the others as seen from their clothing. The two men by the riverbank are engaged in net fishing. It is autumn as depicted by the red leaves flowing in the stream, and the sheaves of rice standing in the fields. A charming, but perhaps untrue story is told of Hokusai in conjunction with this print. Hokusai had been invited to paint a picture before the shögun himself. He arrived with a scroll and paints under one arm, and a chicken under the other. Hokusai lay the scroll down and applied a few bold blue strokes. He then took the chicken and dipped its feet in red, and sent it down the scroll. After which he exclaimed, “Look! Maple leaves in the Tatsuta.” (from “100 Poems, One Poem Each” exhibition, 1/18/2005-) *************************** The Ogura Hyakunin Isshu, or “One Hundred Poems by One Hundred Poets for the Ogura District Residence,” was compiled by Fujiwara no Teika (1162-1241) in the thirteenth century. He was requested to make the poetry anthology by his son, Fujiwara no Tame’ie, who may also have been involved in its completion. Composed by members of the imperial family and high ranking courtiers from the seventh through the thirteenth centuries, the poems are waka, literally “Japanese songs,” a form of court poetry consisting of thirty-one syllables arranged in five lines of 5, 7, 5, 7, 7 syllables each. Waka was the dominant form of court poetry in Japan at the time, a position it held until the advent of haiku in the seventeenth century. Teika’s work would become the most important compilation of classical Japanese poetry for centuries to come, remaining influential well into the modern era. Katsushika Hokusai (1760-1849) turned to literature for inspiration throughout his long career, beginning with luxurious, privately commissioned surimono prints designed for poetry clubs. He was also a prolific book illustrator, providing images for a wide range of works from contemporary Japanese fiction to Chinese classics. During his peak period of woodblock print publication in the 1830s, Hokusai produced two series of single-sheet prints dedicated to poets, True Mirrors of Poetry, a vertical series which included both Japanese and Chinese poets, and One Hundred Poems Explained by the Nurse, a horizontal series in which each sheet illustrated one of the poems in the Ogura Hyakunin Isshu. Together with the slightly earlier series, Thirty-six Views of Mount Fuji, the One Hundred Poems series is considered to be the pinnacle of Hokusai’s work as a woodblock print designer. However, the One Hundred Poems series, which would have been Hokusai’s most ambitious series of single-sheet prints, was interrupted by the Tenpö famine of the mid-1830s, and never completed. Only twenty-eight prints (twenty-seven in full color and one in only keyblock impressions) are known to survive. The Academy is fortunate to have a complete set of the prints that were finished from the One Hundred Poems series, donated by James A. Michener. In conjunction with the major special exhibition Hokusai’s Summit: The Thirty-six Views of Mount Fuji, in Gallery 28 from September 23, 2009 to January 3, 2010, all twenty-seven of the full color prints from the One Hundred Poems series are displayed in this gallery. After the 1830s, Hokusai turned his attention away from single-sheet woodblock prints, although he continued to produce books and to refine his painting skills until the end of his life. Consequently, the One Hundred Poems series, although incomplete, represents Hokusai’s last major accomplishment in this medium. Interestingly, Hokusai became increasingly preoccupied with the symbolism of the number one hundred in his later years, and after his first failed attempt to produce one hundred prints for the One Hundred Poems series, he went on to complete one hundred monochrome illustrations of Mount Fuji in three volumes of woodblock printed books (called One Hundred Views of Mount Fuji ), and he began to affix his paintings with a large seal reading hyaku, or “one hundred.” He aspired to become one hundred years old, at which point he predicted his art would be “divine.” Sadly, he passed away eleven years short of his goal, but he attained immortality as one of history’s most influential graphic designers, whose work continues to inspire artists around the world today. (from “One Hundred Poems by One Hundred Poets” exhibition, 10/08/2009-11/22/2009) 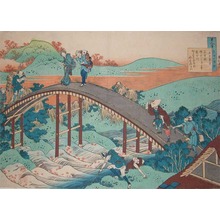 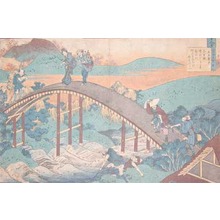 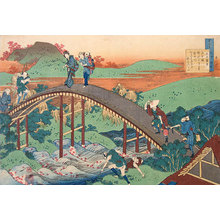 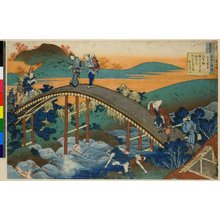 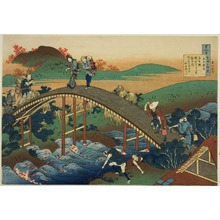 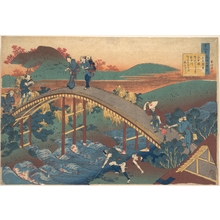 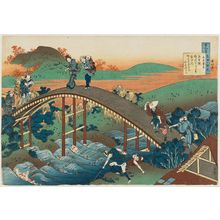 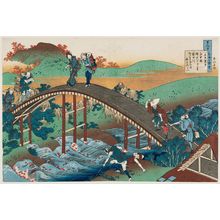 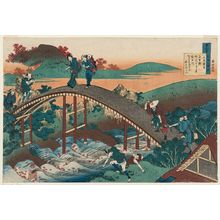