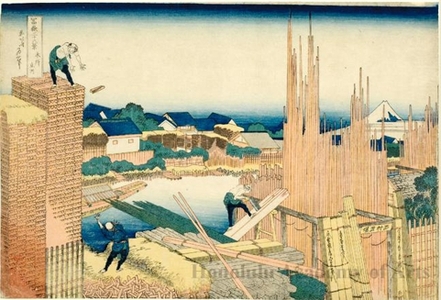 Title: Lumberyards on the Takekawa in Honjo

Hokusai is the master of abbreviation. He could create the most striking designs, with only a single triangle for depicting Mount Fuji. On the other hand, he liked extremely crowded compositions. This print exemplifies such a composition, with its depiction of every stick of wood in lumberyards on the bank of a river. Fuji appears at the far right, behind the screens of the stacked poles. Honjo was adjacent to Asakusa, where the Takekawa, a small river, flows east and west, joining the Sumida River just near Ryôgoku Bridge. Honjo was famous for its many lumberyards on the riverbanks. On this side of the river, three men are busily stacking wood. A man on the left throws a bundle of wood to another man atop the stack. In the middle, a man saws a timber into planks. All these men's postures are from the well-studied human movements Hokusai recorded in his sketchbooks, the Manga. For example, the man throwing the bundle is very similar to the repairman on the roof of the Mitsui store. The lumberman also appeared in several of his prints. Ukiyo-e prints often show their publisher's name by a seal. In this series, Hokusai is sometimes inconsistent about impressing the seal of Eijudô, his publisher. Here he humorously reveals the publisher's name in the horizontal sign at right, which mentions "Lumberyard of Nishimuraya" - that is, Nishimura Eijudô. The key-block was printed in black, not blue, as in the first thirty-six prints. (The Asian Art Museum of San Francisco, HOKUSAI AND HIROSHIGE – Great Japanese Prints from the James A. Michener Collection, Honolulu Academy of Arts: The Asian Art Museum of San Francisco, 1998 Page 91. Cat. 42) ****************** This print shows a lumberyard at Honjo, on the banks of the Tatekawa, a canal linking Edo to the mouth of the Sumida River. Although Mount Fuji is just visible behind the tall pieces of timber on the right, the main subject is the animated activities of the three workers. The two men stacking lumber on the left, with one standing on a precipitously high pile while the other tosses boards up to him, are particularly striking. Hokusai made careful studies of human movement throughout his life, and the postures of these workmen not only are reminiscent of the bold poses in Hokusai’s early actor prints, but also of the sketches reproduced in his Manga series of woodblock-printed books. The name of Eijudö, the publisher, has cleverly been incorporated into the writing on the boards in the lower right, together with the phrase “New edition, Thirty-six Views of Mount Fuji completed.” This indicates that this print was one of the ten supplementary prints added to the original thirty-six views. Accordingly, the key block outlines are printed in black, unlike the first thirty-six designs, in which the key block was printed in imported Prussian blue. “Hokusai’s Summit: Thirty-six Views of Mount Fuji” (09/24/2009-01/06/2010) ****************************** 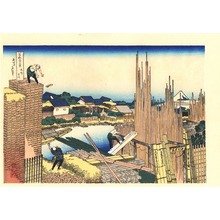 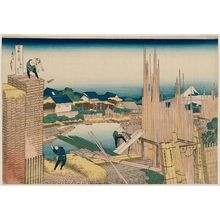 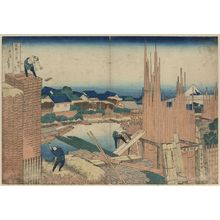 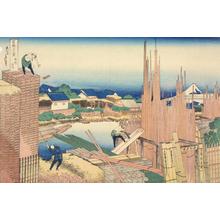 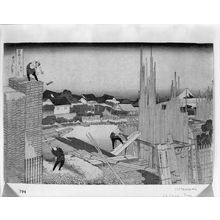 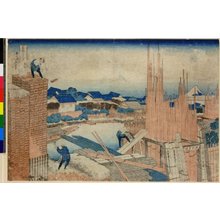 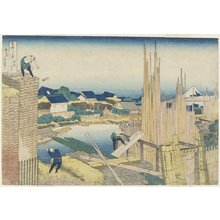 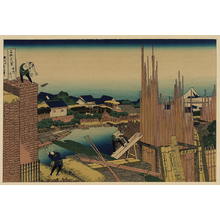 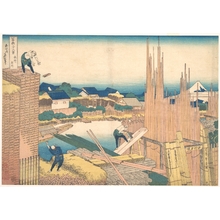 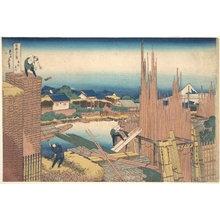 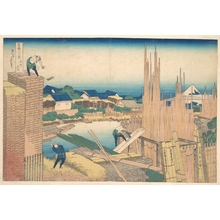 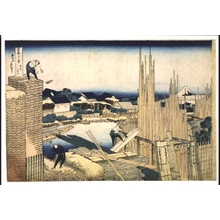 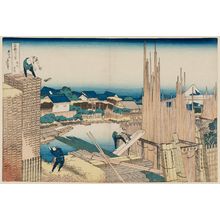 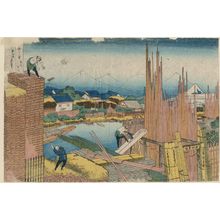 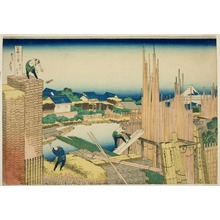