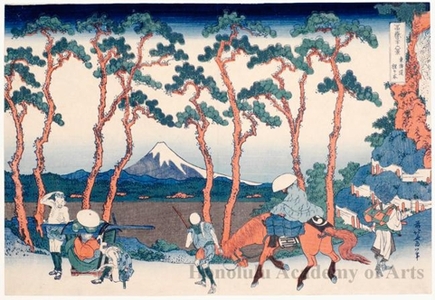 Hokusai’s distinctive design shows unique shapes of pine trees functions as though they are lattices in the composition. Between the trees, a small Mount Fuji is visible in back. It is a great effect to attract people’s eyes. Hasui’s Matsushima scene (HAA# 19223) is similar in term of the arrangement of trees. The contrast beteen dark green of pine leafs and the fresh blue of ocean makes this attractive print. Hasui’s Kaiganji Beach print (HAA#19207)is considered to be a variant from his Matsushima print. Hazy scenery in the background and focused view of the tree’s roots emphasizes their lively power and beauty of nature. (from Nostalgic Japan exhibition 10/18/2004-) - - - - - - - - - - - Mount Fuji is viewed through the screen of tall, angular pines lining the road in Hodogaya along the Tökaidö road. In the foreground are typical travelers often seen on major highways: from the right, a traveling minstrel with a deep bamboo hat that covers the face, a pack-horse rider led by a groom, and a woman in a palanquin (kago) carried by two bearers, who have set it down to rest for a moment. One bearer ties his sandal, and the other dries his sweat. No one but the groom is interested in Mount Fuji; the others are completely absorbed in what they are doing. Trees, often pines, lined these main roads to protect travelers from the sun and wind. Neighborhood people maintained the roads; in return, they were allowed to take leaves and fallen branches for fuel. The horse and rider appear identical to those in volume one of the Manga, Hokusai’s sketchbooks. This is another example of how Hokusai’s serious study of all sorts of forms rewarded his efforts – he could use them at will. The use of the screen of trees to look through at the distant view creates interesting compositional tricks. On one hand, it pushes the background farther away, but at the same time it pulls it closer to the viewer. Hodogaya was the third station from Nihonbashi Bridge on the Tökaidö Road. In modern times, the station has been swallowed up in the gigantic city of Yokohama, but then it was an inconspicuous fishing village. The color scheme is typical of the Mount Fuji series, with a minimum numbers of colors – two shades of blue, two kinds of greens, and a pinkish brown. By distributing these colors evenly in the composition, Hokusai creates a balanced decorative pattern. (The Asian Art Museum of San Francisco, HOKUSAI AND HIROSHIGE – Great Japanese Prints from the James A. Michener Collection, Honolulu Academy of Arts: The Asian Art Museum of San Francisco, 1998 Page 90. Cat. 41) ******************** Once a small fishing village, Hodogaya is now a part of Yokohama. Like the other main highways of early-modern Japan, the Tökaidö (“East Sea Road”) was lined with trees (pines in this case) to protect travelers from the elements. The horse to the right bears a saddle with the mark of Eijudö, the publisher of the Thirty-six Views series. The use of the pine trees as a screen between the viewer and the background creates a visual ambiguity that makes Mount Fuji seem at once more removed and yet also more prominent. This composition is derived from an illustration in the woodblock printed book One Hundred Fujis published in 1768 by Kawamura Minsetsu, who sketched various views of the volcano during his travels. Hokusai borrowed frequently from this and other sources, following a common practice of taking inspiration from (and copying) precedent artworks that was well accepted in the Edo period. “Hokusai’s Summit: Thirty-six Views of Mount Fuji” (09/24/2009-01/06/2010) ****************************** 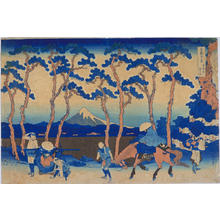 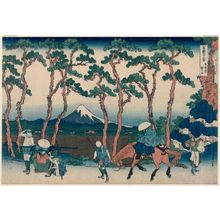 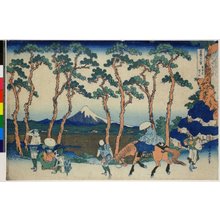 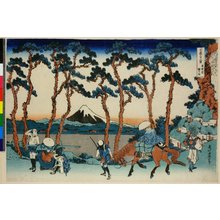 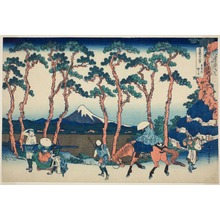 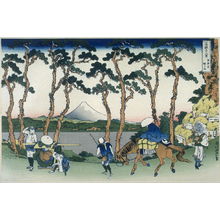 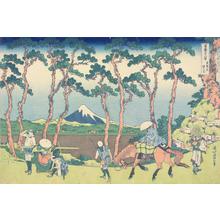 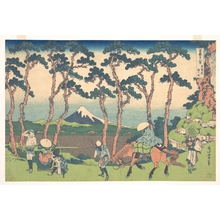 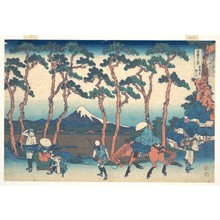 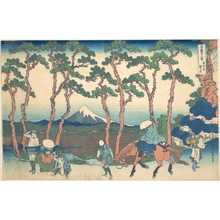 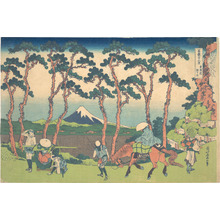 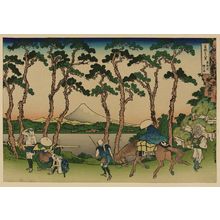 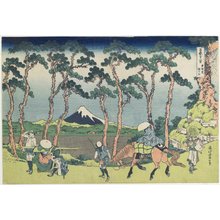 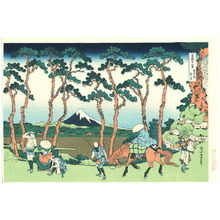 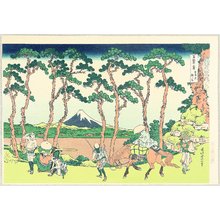 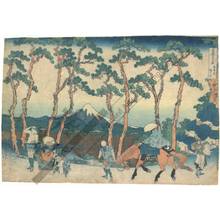 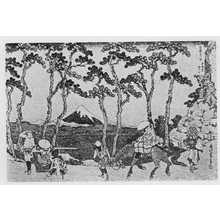 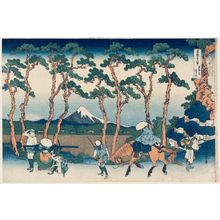 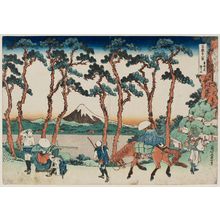 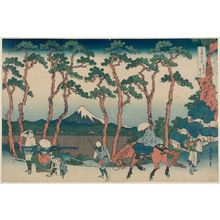 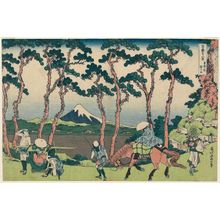 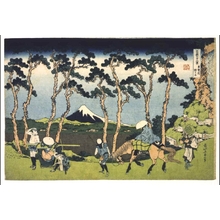