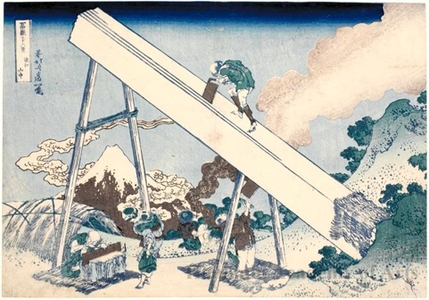 Title: In the Tötoumi Mountains

The print is one of Hokusai’s most extraordinary designs; in it, he employs the boldest geometry of his compositional devices. A huge piece of lumber is propped diagonally on two pairs of triangular supports of different heights. Mount Fuji, framed by the taller support, is seen entwined by a curling cloud. Two lumbermen saw boards from the timber, one standing on top and the other beneath it. Another man repairs the blade of a saw, while a woman carrying her baby on her back talks to him. A young boy warms himself in front of a fire from which a gigantic plume of smoke, echoing the shape of the cloud around Fuji, trails into the sky. A combination of triangles dominates the composition. The diagonal of the timber joins an upper triangle, formed by hills at the right and the skyline, and a lower one, which defines the space for the other workers’ activities. The long plume of smoke moving to the right counterbalances the thrust of the timber. Hokusai sometimes appropriated another artist’s designs. Through reduction or exaggeration he could create compositions far more striking than his sources. This particular design was based on a scene from Shokunin zukushi ekotoba (Visual Depictions of Artisans) by Kuwagata Keisai (1764-1824), (See Kono 1966, fig. 67.) Tötoumi province is located in the western part of what is today Shizuoka prefecture. Pale blue and gray dominate the color scheme. The key-block was printed in blue. (The Asian Art Museum of San Francisco, HOKUSAI AND HIROSHIGE – Great Japanese Prints from the James A. Michener Collection, Honolulu Academy of Arts: The Asian Art Museum of San Francisco, 1998 Page 73. Cat. 24) *********************** Tötoumi Province is located in the western part of what is today Shizuoka Prefecture. One of Hokusai’s boldest compositions, this print is dominated by triangular shapes and parallel subjects: the two supports for the large piece of lumber being sawed on either side by two men; Mount Fuji, around which coiling clouds echo the plume of smoke rising to the upper right corner; and the two halves of the print itself, divided into triangles by the lumber cutting diagonally through the center. Below the larger support, a man repairs a saw blade while chatting with a woman who carries a baby on her back, while a young boy sits in front of the fire. Despite its startling innovativeness, Hokusai cannot be given full credit for this design, which was appropriated from an illustration in Shokunin zukushi ekotoba (Visual Depictions of Artisans) by Kuwagata Keisai (1764-1824). Although Hokusai often borrowed from other artists, in most cases he added drama to the composition through reduction or exaggeration of particular elements. “Hokusai’s Summit: Thirty-six Views of Mount Fuji” (09/24/2009-01/06/2010) ****************************** 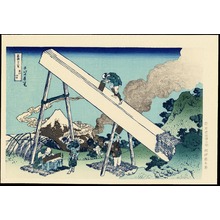 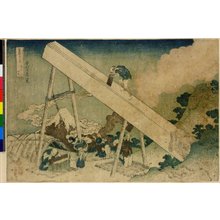 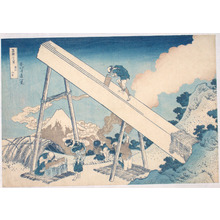 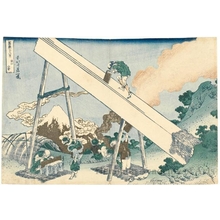 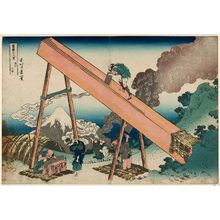 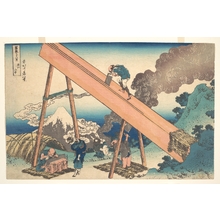