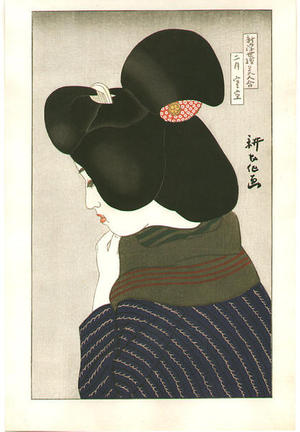 Description: Monday, 21 March 2005 Title February - Collection of New Ukiyoe Style Beauties Artist Toyonari Yamamura 1885-1942 Signature Koka ga Dated 1924 Technique/Medium Woodblock print Impression excellent - very good Colors excellent - very good … mica sprinkled on the gray background Condition very good … two thin spots on the upper margin. Description From the series, "Shin Ukiyo-e Bijin Awase" (Collection of New Ukiyo-e Style BeShin Hanga: New Ukiyo-e Beauties Compared Artist: Yamamura Koka Format: Large oban tate-e: 15.75" x 10" approx Subject: Shin Ukiyo-e Bijin Awase: Februaru, Wintry sky. This woderful design, the epitome of 1920's Japanese bijin ga, is thought to have been carved by Koka himself. Subject portrayed in 'The New Wave, half page b&w p.157 Best known for his prints and paintings of kabuki actors, Yamamura Toyonari made an early contribution to the shin hanga movement. Born with the name Yoshitaka, Toyonari studied with Ogata Gekko, a Meiji printmaker and painter. After graduating from the Tokyo School of Fine Arts in 1907, he exhibited at the first government sponsored Bunten show that year. He used the artist's name 'Koka' for his paintings and lithographs. In 1915, Toyonari designed several small actor prints for the project 'New Actor Portraits' (Shin Nigao-e). The blocks for these prints were carved by Igami Bonkotsu. Several other artists contributed to this project, including Natori Shunsen, Torii Kotondo, and Ishii Hakutei. In total, five booklets of actor prints were produced. The purpose of this project was to promote and advertise the kabuki theater. The following year, the Tokyo publisher Watanabe Shozaburo saw one of Toyonari's actor paintings. He was impressed and he asked Toyonari if he could create a woodblock print based on the painting. Toyonari agreed and both men were pleased by the resulting print, Nakamura Ganjiro I as Oboshi Yuranosuke. They continued to collaborate on several more actor prints and in 1920, Toyonari began work on a series of 12 actor prints for which he is best known. The series was called 'Flowers of the theatrical world' (Rien no hana) and each design was initially produced in an edition of 150 prints. The prints were made in the okubi-e or 'large head' format. Unfortunately the blocks for Toyonari's actor prints were destroyed in the catastrophic 1923 earthquake. As a result, these prints are quite rare. After the earthquake, Toyonari moved on to other subject matter and his collaboration with Watanabe seems to have ended. He continued to design strikingly modern prints, including landscapes, bijin-ga, and kacho-e. Many of these prints show a sophisticated use of light and shadow. In the print, Horned Oranges, Toyonari used a subtle gradient in the background wallpaper that gives the fruit a luminous aura. The stylized lines on the tabletop suggest the shadow of the fruit bowl. It is hard to believe that this arresting still-life was designed in 1926. Another remarkable print, Shanghai Caf・Dancers, was carved and published by Toyonari himself in 1924. This print embodies the spirit of the Roaring Twenties, depicting women in Western clothing who are drinking, dancing, and socializing. It was one of the first Japanese prints to allude to the radical social changes that were taking place in Japan at that time. Toyonari is thought to have designed around 30 woodblock prints in all, sixteen of which were published by Watanabe. He also worked in the lithograph medium. Many of his woodblock prints were shown at the 1930 Toledo exhibition. Publisher: Murakami Date: 1924 Condition: Full size. Paper slightly toned (as usual with this design). Minor Creases, marks and flaws. Generally good state. Colour: Fine Impression: Very fine with exquisite bokashi in the hair and gauffrage. Auties), February - Winter Sky. Format Dai-Oban Width 11.4 inches = 29.0 cm Height 17.7 inches = 45.0 cm 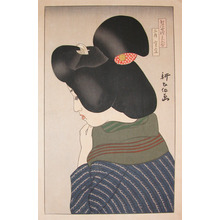 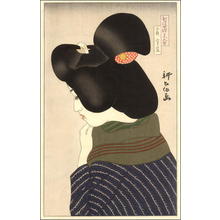 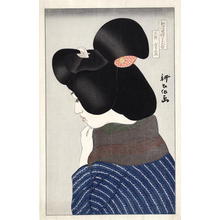 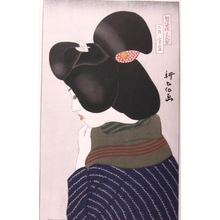