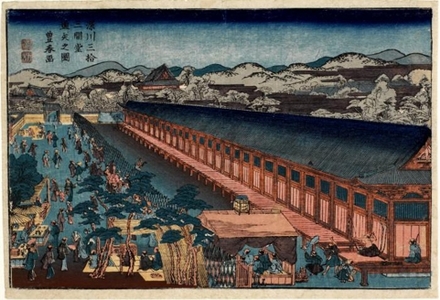 Title: Picture of the Archery Contest at the Hall of Thirty-three Bays in Fukagawa

That this print was made after Toyoharu's death is known from the strong blue (aizuri) pigment, which was only introduced from Europe in about 1820. The subject of the print was a building in the Fukagawa district of Tokyo, known as the Hall of Thirty-three Bays (Sanjüsangendö). This hall was a copy of a13th-century building of the same name in Kyoto, famous for the archery contests held on its long veranda. The Fukagawa hall contained a single sculpture of a Thousand-armed Kannon (the Bodhisattva of Compassion), and its veranda was also used for archery contests. In 1872 the building was moved to another location, and was later dismantled. Toyoharu depicted the original Kyoto hall in a print that appeared in the mid-1770s; this in turn was based on an earlier etching by Maruyama Ökyo, printed in the late 1750s. (from Uki-e exihibition 2004: June-August)