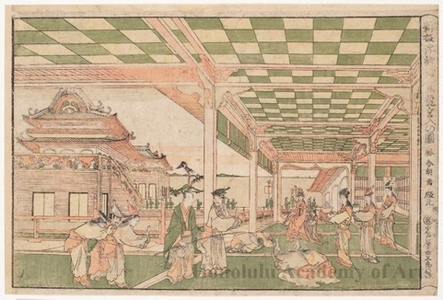 Title: Urashima Enters the Palace of the Dragon King

Urashima was a crab-catcher who lived in Tango Province. In the year 477 he caught a tortoise in the ocean, but instead of killing it he put it back in the water. The next day he saw a shipwreck in the water, with a beautiful woman clinging to it. She asked his help in getting her back to her home. After two days of paddling, he arrived at the Palace of the Dragon King, located in the ocean waves. The woman turned out to be Otohime, a princess in the Dragon King's realm. The two were married, but after three years Urashima wanted to return to his home. The princess made him promise to return eventually to her watery palace, and gave him a box which he was instructed never to open. When he arrived back home, he was told that his family had long ago died out, and was shown his own tomb. Nearly 400 years had passed! Astonished, he opened the box, and died as a puff of smoke emerged. In later versions of this story, Urashima turns into a crane and flies to Mount Hörai, the Isle of the Immortals, where he rejoins the princess. (from Uki-e exhibition 2004: June-August) ************************* Signed Katsu(kawa) Shunrö, this print was done late in the period during which Hokusai used this name identifying himself with the Katsukawa studio. It is an especially dramatic example of his experiments in “perspective pictures” (uki-e) using Western one-point perspective. Under the influence of such designers as Utagawa Toyoharu, uki-e were fashionable at the time, adding a sense of novelty and exoticism to otherwise familiar subjects. However, Hokusai’s use of perspective is not entirely successful, and the boldly receding architecture is backed by a flat landscape with little sense of space. The print tells the story of Urashima, who saved a princess from the undersea realm of the Dragon King and helped her return home, eventually marrying her. After three years, he requested permission to leave the palace, but upon departing he realized that outside the immortal realm, four hundred years had passed! Here Urashima walks with the Dragon King through his palace, while the sumptuously dressed princess can be seen in the background. “Hokusai’s Summit: Thirty-six Views of Mount Fuji” (09/24/2009-01/06/2010) ****************************** 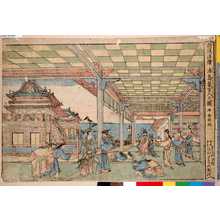