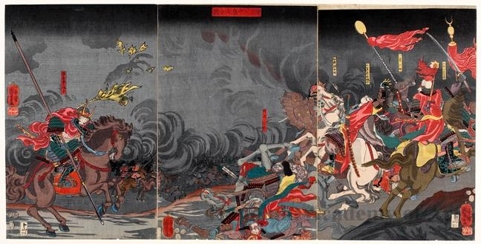 Title: The Great War at Kawanakajima

The battles on the plain of Kawanakajima took place between Takeda Shingen (1521-1573) of Kai Province and Uesugi Kenshin (1530-1578) of Echigo Province, in the north of Shinano Province (modern Nagano Prefecture). Five major battles were fought from 1553 to 1564. The only significant outcome of the war was that Shingen gained control of Kawanakajima. Here Kuniyoshi portrays a dramatic moment, contrasting a backdrop of monochrome flames with the dynamic foreground scene. The warriors on horseback are arrested in place, and Kuniyoshi uses the European technique of chiaroscuro, which is reminiscent of imported engravings depicting European medieval stories. Kuniyoshi is known to have owned many engravings (perhaps created by Japanese artists who were followers of this Western art form) and such works provided inspiration for his art. "Imagination, Power Humor: The Art of Utagawa Kuniyoshi" 10/14/2010 - 12/19/2010 **************************************** 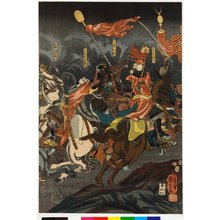 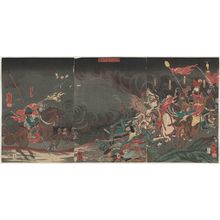