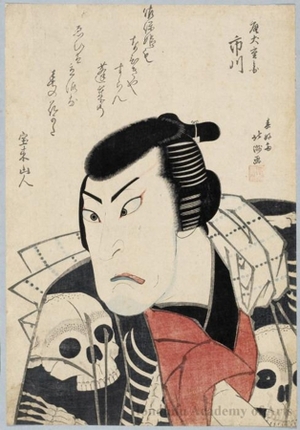 One of the most important early 19th-century (1810-1820s) Osaka artists, Hokushü established the Osaka Style of actor prints. Unlike Kyoto where there was a strong artistic tradition, in Osaka, people were eager to introduce new artistic trends and technologies from Edo (Tokyo), including the multi-colored woodblock printing technology. By the end of the 18th century, Osaka actor prints had become very popular. However, there were few commercial artists available to produce them. Fans of Kabuki Theater occasionally created Osaka actor prints. In fact, even the talented Hokushü was not initially a professional artist. Osaka Kabuki actors performed on occasion in Edo and were thus sometimes depicted by well-known Edo ukiyo-e artists such as Utagawa Toyokuni I (1769-1825). Those Edo prints were sold in Osaka and attracted many Osaka Kabuki fans, which eventually stimulated the production of Osaka Kabuki prints. Thus, there were some cultural exchanges between Edo and Osaka. (from Kamigata-e exhibition 4/1/08-) 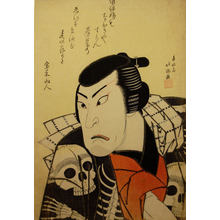 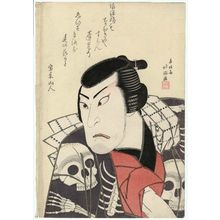