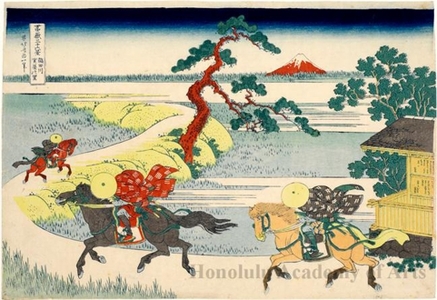 The Sumida, a relatively short river, originates in the Kanto Mountains. The river changes names in the length of its course: first it is called the Nakatsu-gawa, then the Arakawa, the Sumidagawa, and at its lower reaches, the Ökawa or Asakusagawa. This major river flows north to south through the eastern half of Tokyo, connects a network of canals, and then empties into Tokyo Bay. Now as well as in the Edo period, the river was closely integrated into the life of the people; countless wholesale stores and warehouses were located along its banks. Sekiya was located to the north of the city of Edo proper, where the river was called the Arakawa. The village was famous for beautiful scenery. Hokusai, however, depicts a dynamic scene of three pony express riders galloping along the dike above a stretch of marshy land. Mount Fuji recedes in the distance between a gnarled pine growing from the side of the dike and a tree in full foliage on the right. The structure in front shelters a government signboard where official proclamations and changes of law were posted. During the Edo period, well-developed communication system employed runners (hikyaku) and pony riders (hayauma). Carrying mail, documents, and goods, these runners and horsemen transported them swiftly and on schedule. The official carriers were given so much priority and authority that no one could interfere with them. The riders in this print may well be government message carriers. Hokusai again draws on his studies of human and animal movements, convincingly depicting the horses and riders running at a furious pace. Again, the calm and immovable Fuji provides a contrast to the swift horses and riders and the sense of extreme urgency that they evoke. The key-block was printed in blue. (The Asian Art Museum of San Francisco, HOKUSAI AND HIROSHIGE – Great Japanese Prints from the James A. Michener Collection, Honolulu Academy of Arts: The Asian Art Museum of San Francisco, 1998 Page 86. Cat. 37) ********************** The Tokugawa shogunate maintained an effective communication system that utilized runners and horsemen (hayauma or “fast horses”) that allowed dispatches to be carried quickly across the country. The three riders shown here, their speed indicated by the horses’ postures as their hoofs fly off the ground and their manes and tails trail in the wind that also whips the riders’ clothes, are probably official messengers. The small wooden structure on left houses a signboard with government notices, reinforcing this identification. Mount Fuji stands immobile in contrast to the riders, framed by the gnarled pine that occupies the center of the print. “Hokusai’s Summit: Thirty-six Views of Mount Fuji” (09/24/2009-01/06/2010) ****************************** 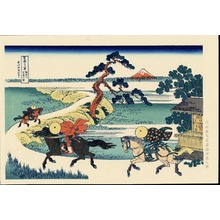 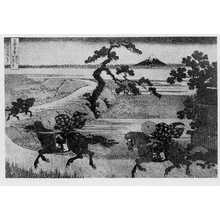 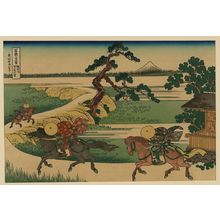 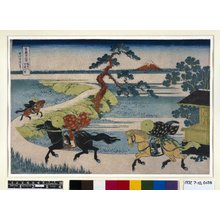 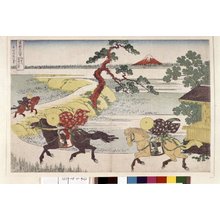 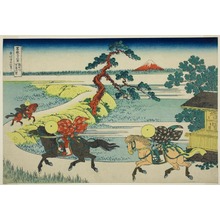 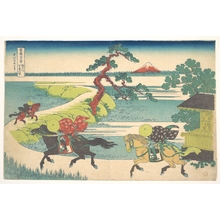 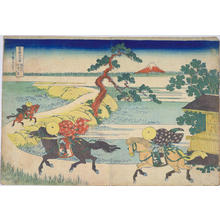 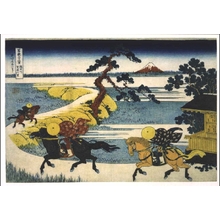 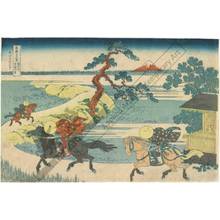 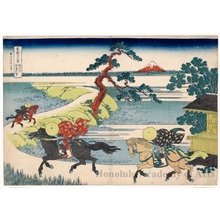 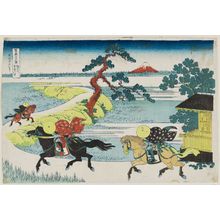 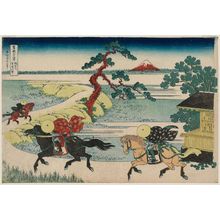 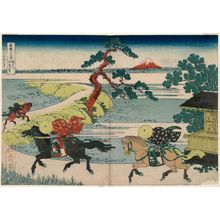 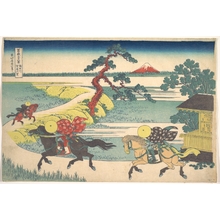