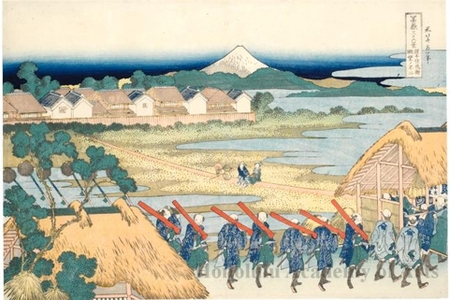 Part of a daimyo procession is passing down the Senju Road. Between the thatch-roofed houses, samurai soldiers are seen carrying guns wrapped in brown cloth. The samurai wear two swords, the symbols of their class. They are in uniform - kimono with a design of blue and white, and green trousers. Some of them glance at Mount Fuji for a moment, finding it beautiful. At the side of the highway are fields where two farm women rest on the path. The completely snow-covered Fuji and the golden field indicates late autumn and the approaching winter. The fenced-in buildings beyond the field are the brothels of the district of Senju, often called Flower Town. Unlike the more famous Yoshiwara pleasure district, Senju was privately operated without government sanction. At its peak in the Edo period, the district is said to have contained thirty-eight brothels. In the shelter at right foreground, an important personage seems to be resting. The procession of a high-ranking samurai was an important ceremonial aspect of that life as well as a costly and unavoidable undertaking. Though in the 250 years of peace in the Edo period, samurai warriors did not engage in combat, their armaments were their status symbols and were disregarded at one's peril. (The Asian Art Museum of San Francisco, HOKUSAI AND HIROSHIGE – Great Japanese Prints from the James A. Michener Collection, Honolulu Academy of Arts: The Asian Art Museum of San Francisco, 1998 Page 92. Cat. 43) ******************* The procession of a daimyö, or feudal lord, passes through the village of Senju, which was the first station on the Nikkö Road, to the northeast of Edo. Wearing two swords that indicate their samurai rank, the daimyö’s retainers are dressed in blue uniforms, and carry guns in red cases. Daimyö were required by the shogunate to alternate their residences between the capital and their own lands, and retinues of up to two thousand people moving to and from the capital were a common sight. The pleasure quarter of Senju, with brothels surrounded by wooden fencing, is visible in the background. Two farmwomen casually watching the procession, and the samurai who turn from their drudgery to admire the view, lessen the formality of the scene. The harvested field in which they sit suggests the season of autumn, as does the snow on Mount Fuji. Hokusai renders horizontal clouds in the traditional Japanese style called suyarigasumi, covering both sides of the composition. These clouds often serve a narrative function in Japanese art to indicate a change of place or time. The device also covers less important areas of the composition, drawing the viewer’s eyes to specific focal points. “Hokusai’s Summit: Thirty-six Views of Mount Fuji” (09/24/2009-01/06/2010) ****************************** 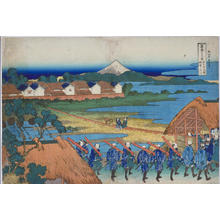 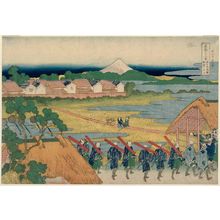 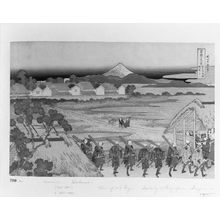 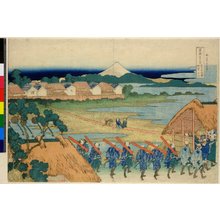 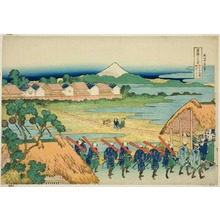 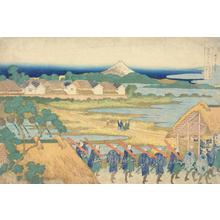 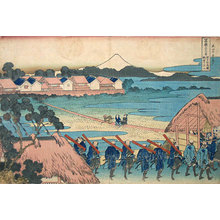 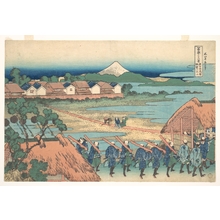 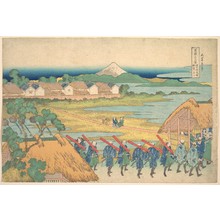 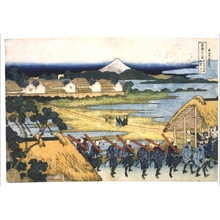 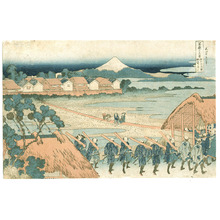 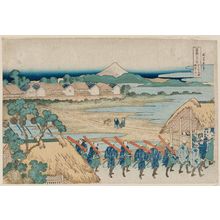 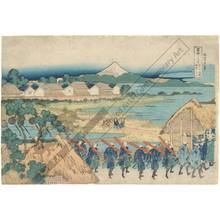