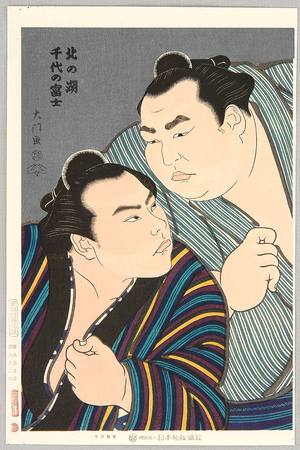 Grand champion, "Yokozuna", sumo wrestlers, Kitanoumi (right) and Chiyonofuji. Kitanoumi was said to be, "He was so strong that everybody hated him" during his reign in 1975-85. Actually, he was a quite earnest and honorable guy. So much so that he was chosen to be the president of the Japan Sumo Association, later. Chiyonofuji had his hey-day in 1980s. He did not have any ambition to be a sumo wrestler when he was a teenager. But he entered one of the sumo schools because the scout persuaded him that he could ride on an airplane if he agreed to come to the school. After some 80 years of absence, the Japan Sumo Association commissioned the making of traditional nishiki-e style woodblock printing to publisher Kyoto Hanga-in, artist Daimon, carver Kishima and printer Ito in 1985. These new Sumo Nishiki-e are sold in Ryogoku Kokugi-kan in Tokyo. 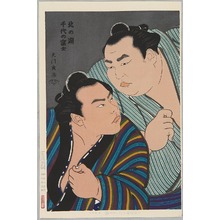 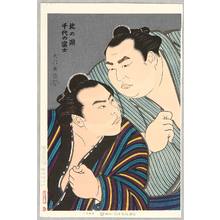