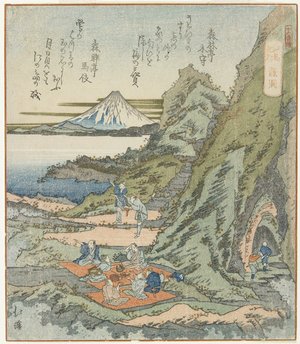 Located off Sh�nan Beach, Enoshima Island was accessible via a land bridge at low tide. Housing a shrine dedicated to Benzaiten, a goddess of music, the island attracted people who liked to combine travelling with religious pilgrimage. Because of its proximity to the capital city of Edo-about thirty miles away-Enoshima was particularly popular among urban residents. Surrounded by the Pacific Ocean on three sides, this spot afforded a magnificent view of Mount Fuji and became a popular picnic site. The artist, Hokkei, included a group of people sitting on a red blanket, joyfully eating and drinking together. From his sixteen-print series "Trip to Enoshima Island," this print depicts the final destination of such a trip-the island and its mysterious Ry�d�, "dragon cave," shown in the lower right. 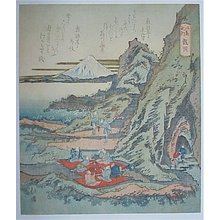