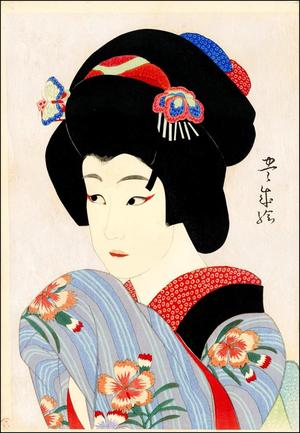 Sunday, 10 August 2008 Shin Hanga: Flowers of the Theatrical World #2 Artist: Yamamura Toyonari Format: Large oban tate-e mica ground: 16.5" x 11" Subject: Against a silver mica ground, a large head portrait of the young actor Ichikawa Shocho II as Oman. Best known for his prints and paintings of kabuki actors, Yamamura Toyonari made an early contribution to the shin hanga movement. Born with the name Yoshitaka, Toyonari studied with Ogata Gekko, a Meiji printmaker and painter. After graduating from the Tokyo School of Fine Arts in 1907, he exhibited at the first government sponsored Bunten show that year. He used the artist's name 'Koka' for his paintings and lithographs. In 1915, Toyonari designed several small actor prints for the project 'New Actor Portraits' (Shin Nigao-e). The blocks for these prints were carved by Igami Bonkotsu. Several other artists contributed to this project, including Natori Shunsen, Torii Kotondo, and Ishii Hakutei. In total, five booklets of actor prints were produced. The purpose of this project was to promote and advertise the Kabuki theater. The following year, the Tokyo publisher Watanabe Shozaburo saw one of Toyonari's actor paintings. He was impressed and he asked Toyonari if he could create a woodblock print based on the painting. Toyonari agreed and both men were pleased by the resulting print, Nakamura Ganjiro I as Oboshi Yuranosuke. They continued to collaborate on several more actor prints and in 1920, Toyonari began work on a series of 12 actor prints for which he is best known. The series was called 'Flowers of the Theatrical World' Rien no hana - each design was initially produced in an edition of 150 prints. The prints were made in the okubi-e or 'large head' format. Unfortunately the blocks for Toyonari's actor prints were destroyed in the catastrophic 1923 earthquake. As a result, these prints are quite rare. Publisher: Watanabe 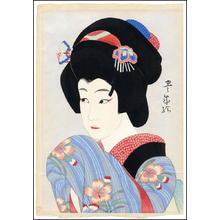 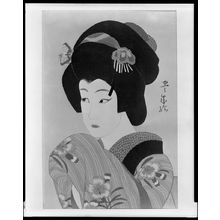