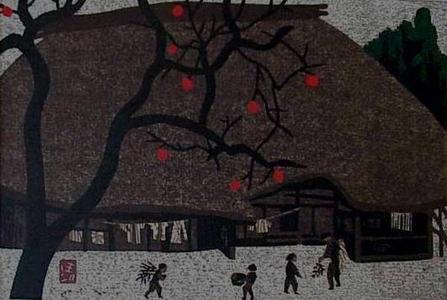 PERSIMMONS KYOTO JAPAN by Kiyoshi Saito This is a woodblock print by the prize winning Japanese print maker Kiyoshi Saito. Three of Kiyoshi Saito's prints were included in the 1972 Los Angeles County Museum of Art catalogue, "Contemporary Japanese Prints", by George Kuwayama. Mr. Kuwayama reports in the catalogue that "Saito Kiyoshi is the most widely known of Japan's contemporary print masters." Kiyoshi Saito is also included in "The 30th Exhibition of the Japan Print Association" catalogue in 1962. He is identified as a member of the Japan Print Association in this Catalogue. Biographical information on Kiyoshi Saito is included in the book "Modern Japanese Prints 1912-1989" by Lawrence Smith. There are also two color photos of his work included in this book. He exhibited as early as 1937. Saito was featured in Statler's "Modern Japanese Prints: An Art Reborn" (1956) by which time he was already popular in the West." (see Lawrence Smith book) The print at auction here is not titled nor identified as to place. Mr. Saito is known to have made prints of buildings in Kyoto (Modern Japanese Prints). The tree appears to have persimmons on it. My photo was a little washed out. The building roof is a dark brown, the tree branches are black, and the persimmons are a dark orange and stand out very boldly. The print is double stick taped down to a board along the edges. I could not raise the mat enough to examine the top edge. There are rub marks on the print that show as a little glossy at an angle and do not show from a straight on view of the print. The image showing is 10 by 14 3/4 inches. 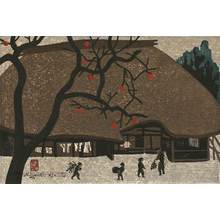 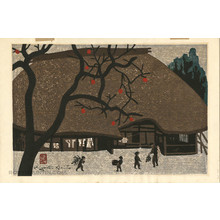 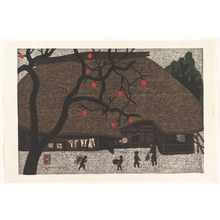 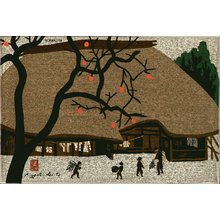