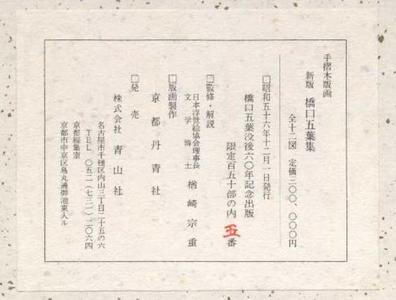 #6 -- August 18, 2004 -- "Edition Size for 60th Anniversary 'Commemorative Edition' Goyo Prints" Recently, one of our readers of Ukiyoe-Gallery.com sent to us an email and image which now gives us further definitive information about the "edition size" of the 60th Anniversary "Commemorative Edition" Goyo prints which were sanctioned by Goyo's family during the very early 1980's. This "lable" is seen just below. Reading this Japanese lable, what we have now been able to learn is that prints of this 60th Anniversary "Commemorative Edition" set were indeed published in December of 1981 ("Showa 56"), and that these Goyo prints were produced as a limited "edition size" of only 150 impressions each. In this case, the "red hand-written character" seen above indicates that this was "set #5" of 150 total "12-print sets" published by Tanseisha Publisher. Of course, over the past two-plus decades, these and nearly all other Japanese prints have increased in value as the universe of Japanese print collectors has grown worldwide. And to collectors of prints of the "shin-hanga" era, because of their extraordinary beauty, the "bijin-ga" prints by Goyo are among the most highly prized of all. With various embellishments such as their sumptuous "mica" backgrounds, gold metallic pigment highlights, extensive use of "gauffrage" (embossing), and skillfully executed "bokashi" shading, is it any wonder that these prints are so highly valued?? Shown below are three of Goyo's beauties.