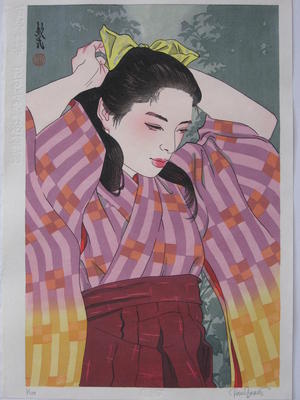 Ebicha Hakama ? Maroon Hakama, a new print by Paul Binnie for November 2012 I’m pleased to announce the release of the second print in my series Hyakunen no Hana (Flowers of a Hundred Years), the first of which went out in May 2012. The new design is called Ebicha Hakama, or Maroon Hakama, of 1910, referring to the trouser-like over-kimono worn by the girl in the print, which identifies her as a female university student. Women’s universities were founded in the first decade of the 20th century, such as the Japan Women’s College (now University) in 1901 in Tokyo and several others throughout Japan soon after. By 1910, it was becoming acceptable for young women to consider a university education instead of an early marriage, and this young woman wears the usual hakama over her kimono to symbolise a female student of that time. Maroon hakama became such a symbol of female education that the wife of the artist Kaburagi Kiyokata, a well-known intellectual called Tsuzuri Teru, was kept distant from the artist's family by his mother, who declared 'she did not like maroon hakama’ ? and, we may assume, all that they implied about the wearer. Hakama, worn by both men and women in Japan in the ancient past, allowed freedom of movement and kept the kimono clean rather like an apron, so were a useful item of clothing for certain classes of society and professions. Of course, in traditional depictions of Heian female writers, such as Murasaki Shikibu or Ono no Komachi, they are inevitably wearing hakama, but this garment had fallen out of favour with women until a revival in the late 19th century. We might imagine, in a typical Meiji mix of East and West, that this girl is wearing high, buttoned leather boots on her feet, and many female students even had a blouse under their kimono too. Technically this is a very complex design ? it employs 47 printings, including silver metallic pigment and 23 carat gold leaf in the hair ribbon motifs of laurels symbolising academic achievement, and there is fine mica admixed with the maroon of the hakama to give a dull lustre rather than a glitter, so suggest heavy wool serge. The title and my name in the bottom margin are embossed, and there are many areas of bokashi ? hand shading, particularly on the kimono sleeves, which shade from mauve to yellow in two intensities of colour, overlaid with orange squares, also in bokashi. The edition size is of course 100, and the print is 47x33cm or 18 ? x 13 inches, a very large oban size closer to two Edo or Meiji-period oban prints, as was the first design. Those who bought Kuchi-e, the first print in this series, will be offered the same edition number, so that they can build a matched-number set of these prints, and once the series is complete, there will be a free chuban print given to all those who have collected the whole set, which will be numbered to match each set. That free design will not be available separately, or commercially. The next print in the Hyakunen no Hana series will study a Moga, or ‘Modern Girl’ of 1920, and will be released next spring; I will try to continue to release two designs in this set each year. There are also two new cloud designs underway now, of Dawn and Dusk, as well as other print ideas before then. Ebicha Hakama will be available in a few days from me or from my usual galleries and print dealers, and I hope you will find it appealing. Paul Binnie London Oct-Nov 2012