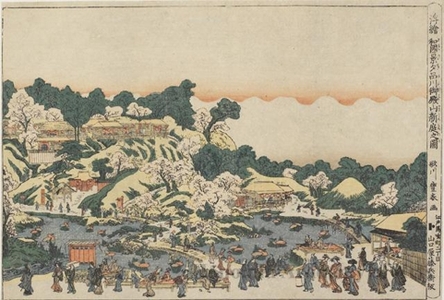 Title: Famous Places of Japan: The New Garden at Gotenyama in Shinagawa in the Evening

This print is a good example of one type of perspective print in that the scene is shown from a bird's-eye view, and almost all the tea-houses are drawn in parallel perspective. An interesting feature of this print is the presence of a miniature Mount Fuji at the upper right. In the Edo period, the worship of this sacred mountain became extremely popular among townspeople. This movement is said to have been founded by Hasegawa Kakugyö, an ascetic who formed his followers into associations known as Fuji-kö. Miniature Fujis were built by these associations, using as a base lava transported from the mother mountain. (from Uki-e exihibition 2004: June-August) ******************************* An interesting feature of this print is the presence of a miniature Mount Fuji in the mid-ground at the right side of the print. As the popularity of the Fuji Cult spread, miniature models of Mount Fuji were built around Japan, using lava transported from the mother mountain as a base. These miniatures provided a means for women, who were not allowed to climb the mountain, and others who could not make the pilgrimage, to be involved in the cult. Utagawa Toyoharu was a founder of the Utagawa School. Famous for his uki-e (perspective prints), Toyoharu created landscape prints using the traditional Japanese bird’s-eye view combined with Western perspective, as seen in this print. Toyoharu also relied on traditional parallel perspective, in which the composition was constructed of several overlapping planes (the foreground with people, the mid-ground across the pond, and the background with tea houses on a hill) to suggest distance. Further evidence of Toyoharu’s eclectic style can be found in the unusual design of the clouds, which ultimately derives from an attempt to translate Western techniques for depicting clouds into the Japanese medium of woodblock printing. “Hokusai’s Summit: Thirty-six Views of Mount Fuji” (09/24/2009-01/06/2010) ******************************