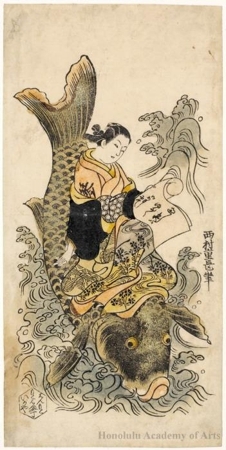 Title: A Parody of the Immortal Kinkö

Nishimura Shigenaga owned property on Töri-abura Street in downtown Edo (modern Tokyo), and later ran a bookstore. He designed a number of book illustrations as well as single-sheet prints, and was the founder of the Nishimura School of ukiyo-e. This hand-colored urushi-e style print parodies a classical Chinese subject, the Immortal Kinkö. Kinkö was a legendary immortal (and skilled koto player) from the Zhou period (ca. B.C.E 1000-256) in China. After wandering for over 200 years, he returned riding a carp, and promised his apprentices that he would catch a baby dragon. Since there is a legendary tale about carp becoming dragons after swimming up a waterfall, the carp that the woman is riding in this print probably represents the baby dragon. (Feb 2011) ALT TEXT This print depicts a scene from a Chinese legend. One day, a sage (the painter and musician K'in Kao) met the Fish King. She was invited to spend a few days with him underwater. After a month, K'in Kao returned riding a carp. This story was visualized and revitalized by Shigenega. Here, a courtesan replaces the sage. She is reading a letter, which says: "How tender was our meeting yesterday." The classic story was transformed to fit into Edo society, demonstrating how even commoners, including artists like Shigenaga, were educated enough to be familiar with the classics and witty enough to understand parodies about them. This print utilizes the urushi-e (lacquer print) technique, invented for hand-colored printmaking. To depict hair, kimono, and elaborate sashes (fashionable during the period), artists began to use black ink with a high glue content. This technique produced prints with a lustrous effect, suggestive of Japanese lacquer ware. Artists also began to sprinkle powdered brass, which resembled gold, over the print surface. This is visible in the courtesan's black kimono. 2003