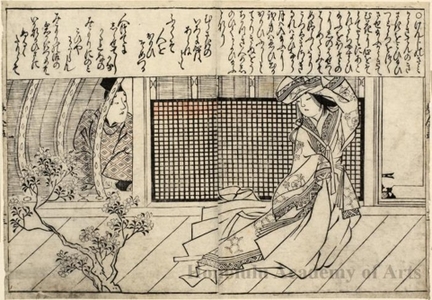 Literature has been enjoyed in Japan since ancient times, yet traditionally only the upper class had access to it. This changed in the Edo period (mid-seventeenth century), as the publishing business flourished and the masses gained access to a wide variety of illustrated books, which helped to spread the classics to the common people. Hishikawa Moronobu (?-1694) produced over 150 illustrated books. He also worked in the genre of e-zukushi (literally, “a pile of illustrations”), illustrated stories built around themes such as the occupations of Edo men, nature, famous women, and novels including The Tale of Genji. This print is a good example of e-zukushi, and comes from a booklet titled Bijin e-zukushi, meaning “Illustrations of Beautiful Women.” It depicts a scene from the Tale of Genji in which Prince Genji is visiting Princess Oborozukiyo (Hazy Moon), who has a brief scandalous affair with him. The text above the figures explains the scene. This print demonstrates the early ukiyo-e style, created using a single woodblock without colors. Its rough-hewn lines and stark black and white compositions became very popular in the Edo period. The figures are dressed in classical Heian period fashion. Moronobu was one of the inventors of this type of picture booklet, which conveys a story visually rather than through the medium of written words. (from Tale of Genji exhibit 1/11/2006-)