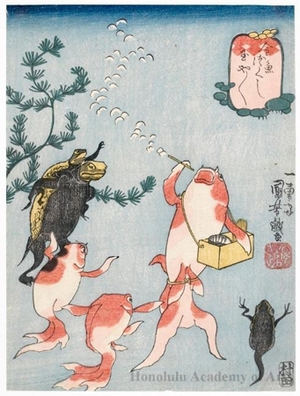 Kuniyoshi frequently personified animals in his compositions, adding a humorous element to his prints. This print depicts a goldfish making bubbles, while other goldfish and a turtle family look on. The Japanese tradition of personifying animals has a long history in painting, dating back to the Kamakura period (12th-13th century). This often was used to satirize human society, as in the most famous example, the Frolicking Animals scroll (Chöjü giga), of which the Academy has a well-known 16th century copy in its collection. Goldfish scooping (Kingyo-sukui ) is a game for children in which a player catches goldfish with a scooper, which was historically made from a sheet of paper stretched on a frame. The game first started in the late Edo period (early 19th century) for special occasions such as summer festivals. Today it is still a popular summertime children’s game. While this print does not explicitly depict goldfish scooping, this activity would have been implied to the Edo audience for which Kuniyoshi made his prints. “Midsummer Night’s Pleasure” 08/05/2010-10/10/2010) ********************** 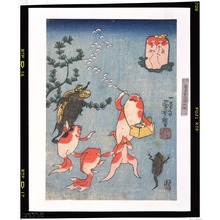