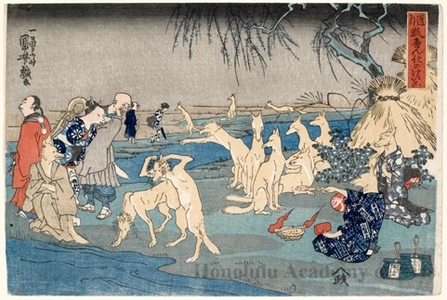 A member of the prominent Utagawa School of woodblock artists, Kuniyoshi gained acclaim with his intricately detailed and dynamic musha-e (warrior prints). However, never one to be pigeonholed, he also tried his hand at landscape compositions along with experimental works such as the one seen here. In this print he abandons his trademark tightly focused style for a more spacious composition. Among the sleek bodies of the foxes one can still catch a glimmer of Utagawa's mastery of detail in the kimono patterns of the creatures. Within Japanese folklore no creature embodies the same mix of contradictions that can be found in the fox spirit. Servant of the goddess Inari, destructive trickster or benevolent defender of good, the fox spirit's role in myth is as fluid as the sinuous lines of its form. Among the great magical powers of foxes, one of the most commonly wielded is the ability to mimic human appearance. Here we see a group practicing this skill. While some sit by a fire in intricate kimono and others engage in small talk, two foxes near the river stack reeds on their heads, a necessary preparation for shape-shifting. Elsewhere in the print one can see foxes that have already succeeded at their task, parading about as young women or monks. Foxes disguised as humans are commonly found in Kabuki. Some of them, such as the famous Genkurö and Kuzunoha, move beyond novelty into key roles in their respective plays, Yoshitsune and the Thousand Cherry Trees and A Courtly Mirror of Ashiya Döman.