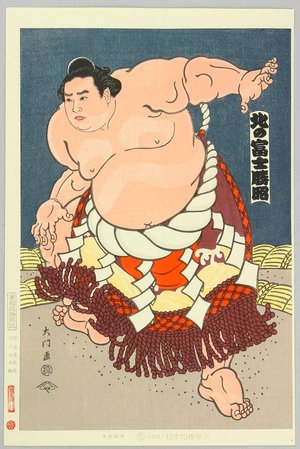 Grand Champion Kita-no-fuji Katsuaki (born 1942)became the grand champion in 1970. Kitanofuji was a very popular "Yokozuna" because of his flamboyant sumo style and good looks. After he retired from sumo, he was quite successful in the restaurant and music-record industries. His hit-song, "Neon Mujo", was sold more than 50,000 copies. At the traditional "intai-zumo" ceremony (The wrestler's last official sumo match to farewell his fans.), he wore white tuxedo and sang his favorite songs. He became the president of Sumo Association and later worked as a competent commentator for the sumo broadcasting by NHK Television. He was a unique "yokozuna" who changed the stolid image of sumo wrestlers.