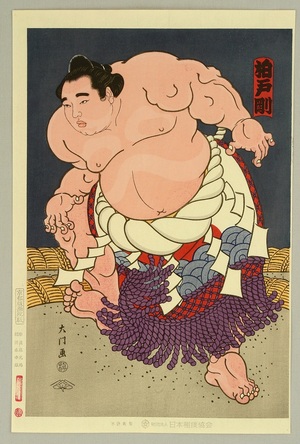 The 47th "Yokozuna" grand champion Kashiwado(1938-1996). He was a very popular wrestler and the archi-rival of the great grand champion, "Taiho" during 1965-1975. After he won the championship in 1961, he and other wrestlers were invited by Air France to a sumo exhibition. At an airport, he was mistaken by airport officials as the wife of Kasugano, his sumo mentor because of the sumo wrestler's traditional hair style. After some 80 years of absence, the Japan Sumo Association commissioned the making of traditional nishiki-e style woodblock printing to publisher Kyoto Hanga-in, artist Daimon, carver Kishima and printer Ito in 1985. These new Sumo Nishiki-e are sold in Ryogoku Kokugi-kan in Tokyo.